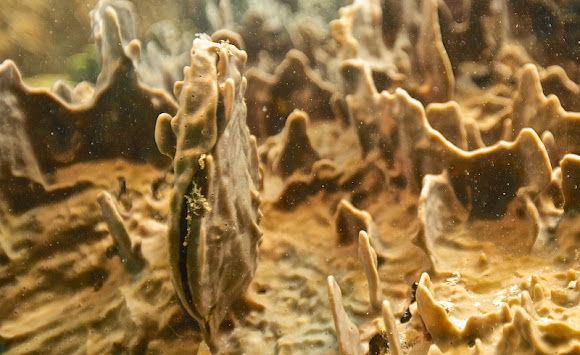 This clam has evolved a symbiotic relationship with a sponge. In return for hiding and protecting it, the sponge has grown an intake tube where the clam exhales water so that the clam pushes water into it. It is as if one day a clever little sponge thought, ‘that thing would make a good water pump, I’ll grow over it and it will feed me nutrient rich water faster than I could ever do by myself’. The clam would have agreed to the idea thinking, ‘awesome, I will be so well hidden inside a toxic sponge, no slimy stretchy-mouthed oyster-murdering snail will ever eat me’. The two then became best buddies, the sponge grew faster than the other sponges around it and the clam got other friends to stick around to help them. Guardian: Heitor Cavalheiro

We were actually at Upolu Reef and it was only about 4-6m deep.

It was a great discovery and since seeing one I have spotted the clam/sponge relationship again and again.

Thanks David. I hope you don't mind but I'll edit your spotting and add your comment under the "habitat" section - this makes it more personal as a find from you and makes the spotting complete.

You could add this to the mission "Symbiotic relationships"
http://www.projectnoah.org/missions/7987...


I think it's great that you have found more. With the map, I think quite a few of us have problems with it !

I have been having trouble with the Map, we were actually at Upolu Reef and it was only about 4-6m deep. It was a great discovery and since seeing one I have spotted the clam/sponge relationship again and again.

I love the story David ! A beautiful relationship !! I can see this is just off Cairns but how deep was the water there ?