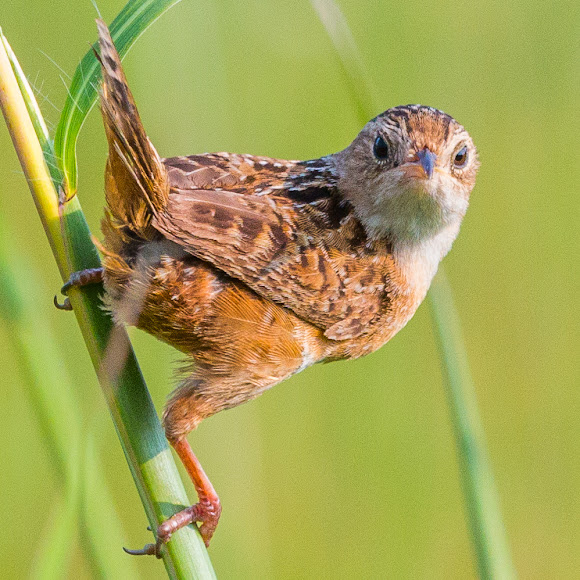 This Sedge Wren was not shy about posing for photos very close to the path, and was ironically hanging out in a stand of sedge grass. A small and secretive passerine bird in the family Troglodytidae. It is widely distributed in North America. It is often found in wet grasslands and meadows where it nests in the tall grasses and sedges and feeds on insects. The sedge wren was formerly considered as conspecific with the non-migratory grass wren of central and South America. The sedge wren is a relatively small wren that measures 10 to 12 cm (3.9 to 4.7 in), weighs 7 to 10 g (0.25 to 0.35 oz) and has a wing-chord of 4.1 to 4.6 cm (1.6 to 1.8 in). Wingspan ranges from 4.7-5.5 in (12-14 cm). Females and males have the same plumage but males are slightly larger. Their head and back are tawny brown streaked with black and white. They have a pale buff supercilium and brown irises. Their rump is orange and tail is tawny brown bared with black. Wings are tawny brown bared with black, white and pale buff. They have a white throat and belly with pale buff on the side. Their beak is long and slender and measures on average 6.77 to 6.95 mm The upper mandible of the beak is brown while the lower mandible is yellow. They have pink legs and feet. Juveniles are overall similar to adults but have less streaking on the head and nape and their chest is paler than adults. The sedge wren can be differentiated from the similar marsh wren (Cistothorus palustris) by its smaller size, streaked crown and different song.

The pegman feature for the map in the upper right of all the spottings enables a street view of the spotting locale. Very intestingly, all the photos I saw that it showed were old (prior to most of all of the restoration work), so it shows an intesting before and after comparison.

Ingrid3 a year ago

I just discovered the pegman feature for the map in the upper right of all the spottings that enables a street view of the spotting locale. Very intestingly, all the photos I saw that it showed of this preserve were old (prior to most of all of the restoration work), so it shows an intesting before and after comparison. @Brian38: I added some more notes about the restoration that I found.

Lol. Well, as exotic as they might be, this little one is really beautiful and lovely. It's a well deserved SOTW jazz.man!

Great photos of a handsome little bird in its habitat - Congratulations jazz.mann !

Thanks Mel, Sukanya, Armadeus and Rithmini. It's ironic because I figured that if I was ever lucky enough to get a SOTW, it would be one of my shots from exotic locales like Sri Lanka safaris (leopards, elephants, primates), or my dolphins in mid-air from New Zealand. I never figured I would get the honor for a spotting one hour from my suburban Chicago home in a tiny preserve amidst the midwest farmland.

Congratz on the SOTW jazz.man!

Wow, thanks to all for the kind recognition! Shout out to Bob Bryerton, a nature interpretor for the Will County Forest Preserve District who lead the hike that enountered this spotting and helped with the ID.

Your Sedge Wren spotting has been voted Spotting of the Week! Thank you for sharing this wonderful spotting with the Project Noah community! We look forward to seeing your next nature discovery!

wow, that is quite a course load. I am sure you will do well.

I'm still a school student so I don't study in a particular field or subject. But my subjects for this exam are Maths, Science, Sinhala (my mother language), English, History, Buddhism, Commerce and Accounting studies, ICT, and Western Music. We don't study very deeply about any of these but cover a vast area so there's a lot to study lol... That's why I'm away sometimes