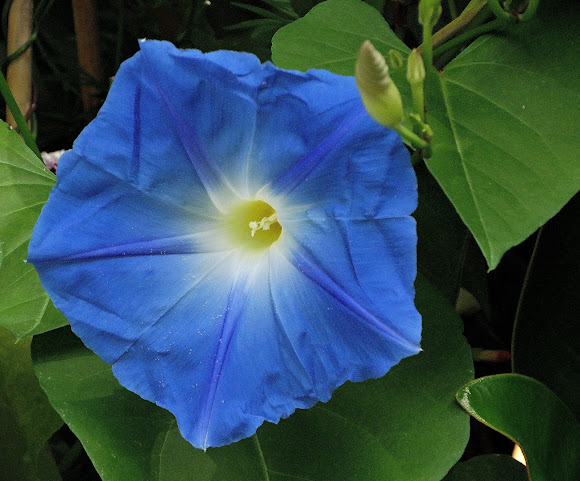 Ipomoea tricolor (morning glory) is a species of flowering plant in the family Convolvulaceae, native to the New World tropics, and widely cultivated and naturalised elsewhere. It is an herbaceous annual or perennial twining liana growing to 2–4 m (7–13 ft) tall. The leaves are spirally arranged, 3–7 cm long with a 1.5–6 cm long petiole. The flowers are trumpet-shaped, 4–9 cm (2–4 in) in diameter, most commonly blue with a white to golden yellow centre.

The seeds, vines, flowers, and leaves contain ergoline alkaloids, and have been used for centuries by many Mexican Native American cultures as an entheogen; they were known to the Aztecs as tlitliltzin, the Nahuatl word for "black" with a reverential suffix. In South America, the seeds are also known as badoh negro. The hallucinogenic properties of the seeds are usually attributed to ergine (also known as d-lysergic acid amide, or LSA), although the validity of the attribution remains disputed. Lysergic acid hydroxyethylamide and ergonovine are also considered to be contributing psychedelic alkaloids in the plant. While ergine is listed as a Schedule III substance in the United States, parts of the plant itself are not controlled, and seeds and plants are still sold by many nurseries and garden suppliers.