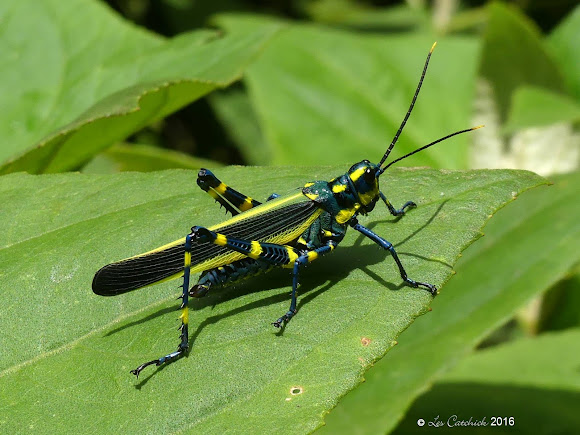 This large colourful grasshopper I had assumed would be easily identified as there were large numbers of them and in some cases very many nymphs too with a few adults. I have found 2 possible IDs but they tend to disagree though having the same genus - Chromacris.

Beside the Manu Road at various altitudes around 1000 m. This is cloud forest.

Given the number easily seen in an area commonly visited I am astonished that a definite ID is not easy to find. Following Dominik's comment I have now uploaded a photos of one with all its legs to replace the original photo (taken 2 days later) and of some with numerous nymphs around them.

And your ID is completely correct now!

A complete one now Dominik!

Does that mean you are certain it is C. peruviana?

Thank you both.
I have now found others with the same suggestion including the one you give to Adrian's website Dominik.

I had not even noticed the missing leg Dominik.
I will have other photos of them taken later on the trip but am only just sorting through my photos. I will upload another when I get to one.

Romaleidae, Romaleinae, Romaleini, Chromacris sp. and probably or most probably Chromacris peruviana. Do you have any other picture of it, where we can see the hindlegs. In yours obviously the right leg is missing.
http://www.whatsthatbug.com/2011/02/28/g...
http://www.learnaboutbutterflies.com/Ort...