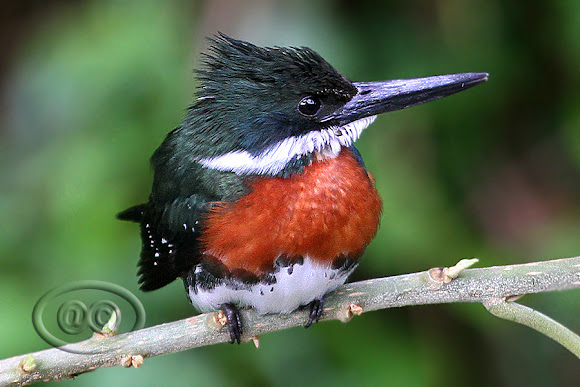 Bird of the family Alcedinidae, the Green Kingfisher measures 19 cm and has the upper limbs in dark green, contrasting with a white band that connects the base of the beak to the neck, where it is crossed by the nuchal crest; wings crossed by three transverse lines of white spots; bases of white external rectrices. The male has the lower parts white with brown breast and the female has yellowish breast or white stained green.

To feed themselves, lands on vegetation at water's edge (between 1 and 3 meters), from where observe their prey before diving. Sometimes hangs in the air before diving. Eating fish from 3 to 5.5 centimeters and crustaceans, as a more general kind of eating habits.

It occurs from Texas and Mexico to Argentina and throughout Brazil. It is the most common species in Brazil. Inhabits lakes with rich aquatic vegetation, border small rivers and large, mangroves; fits even in small collections of water taken by marshy vegetation, such as water lilies and other aquatic plants.

The town of the coordinates that I gave for search, is not DUQUE DE CAXIAS, as reports the search map of this page, but PETRÓPOLIS.

Thank you for your kind words, FredLuizRomeiro, venusflytrap2000, Jim Nelson and armadeus.4.

Wonderful series Antonio. Beautiful little bird. Thank you for the info and for sharing :)

It is an honor to have this series chosen as SOTD.
Thank you PG Rangers!

What a gorgeous series and good info!

Congrats Antonio, this amazing capture of the colourful Green Kingfisher has been chosen as Spotting of the Day!

Awesome series António,congrats and thanks for sharing