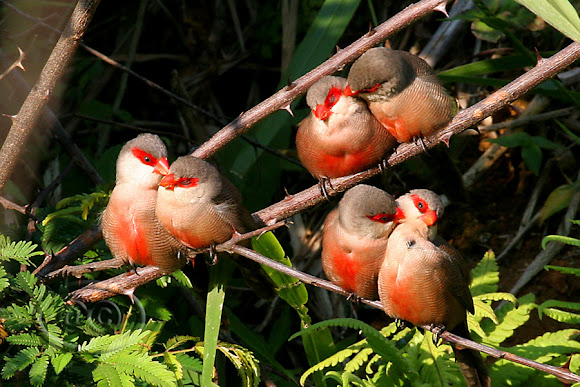 The common waxbill (Estrilda astrild), also known as the St Helena Waxbill is a small bird, 11 to 13 centimetres in length with a wingspan of 12 to 14 centimetres and a weight of 7 to 10 grams, native to sub-Saharan Africa that has been introduced to many other regions of the world.

In Brazil it is called was introduced by slave ships during the reign of Peter I and reintroduced in São Paulo in the second half of the nineteenth century.

Common Waxbill forages in dry and grassy areas with shrivelled shrubs, and mainly near water. It frequents open lands, pastures and urban areas. It also may be found at forest edges and in clearings.

Common Waxbill is very gregarious. It often moves in large flocks, and the birds gather at night at communal roosts. This species breeds during the rainy season, when insects are sufficiently numerous for feeding the clutch.

The town of the coordinates that I gave for search, is not DUQUE DE CAXIAS, as reports the search map in this page, but PETRÓPOLIS.

I love these birds. We have them in Portugal too. Great pictures by the way :)