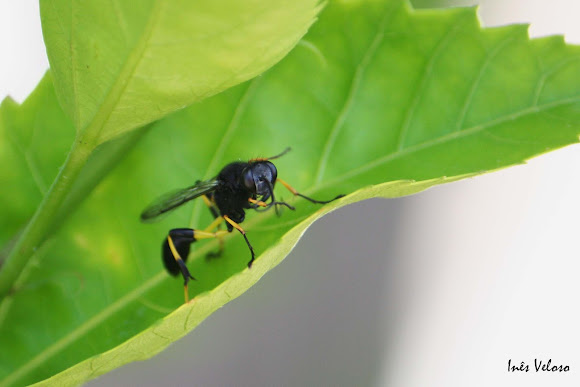 Medium-sized body (17–27 millimetres), which is dull black with a long, yellow petiole (waist). The legs are black with yellow bands, the antennae are black and the wings are clear. Sceliphron spirifex is a species of Sphidae wasps, which are predatorial and parasitoidal wasps. They are solitary and build nests made of mud. They provision these nests with spiders and other preys as food for the developing larvae.

Africa and southern Europe. Strongly associated with buildings and other man-made structures.

Like other solitary wasps, Sceliphron species are not aggressive and do not sting unless mishandled. They are sometimes regarded as beneficial due to their control of spider populations, though the spiders themselves may be beneficial in controlling pest insects.