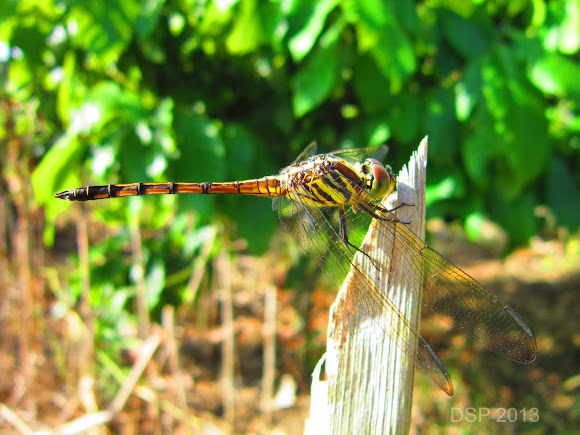 Mature males develop a bluish-white pruinescence on the back of the abdomen and, in western individuals, on the thorax. They display this pruinescence to other males as a threat while defending territories at the edge of the water. Mature male with blue-white abdomen and thorax.Although the species name longipennis means "long wings", the wings are not substantially longer than those of related species. Females do, however, have a short abdomen that makes the wings appear longer in comparison.The blue dasher grows up to 25–43 mm long. Juvenile males will show female coloration before they turn blue. Females are paired with yellow stripes on the dorsal side of the first 8 abdominal segments, the part of the body that lies between the thorax and the pelvis and encloses the stomach, intestines, liver, spleen, and pancreas; more commonly known as the belly. Females are also reported to turn blue, but at a slower rate then the males.

They are found by ponds, lakes, marshes, and bogs. They can also be found in almost aywhere when there is still water. Larvae are very tolerant of wetlands with poor water quality and low dissolved-oxygen levels.

Found it near cacao plantations in Lampung.

I've checked the other spesies from Hemicordulia genera, it didn't fit to my photos. The good news is i've found the name for this dragonfly. The common name is Blue Dasher (female) :D

I think it looks similar, but the thorax and the abdomen your ID suggestion has different pattern from mine. Ok, I will check the other species from Hemicordulia genera if it had matching appearance that fits to my photos. Thanks in advance, TTS Julia e Rita :))

Could it be this one?
http://www.brisbaneinsects.com/brisbane_...