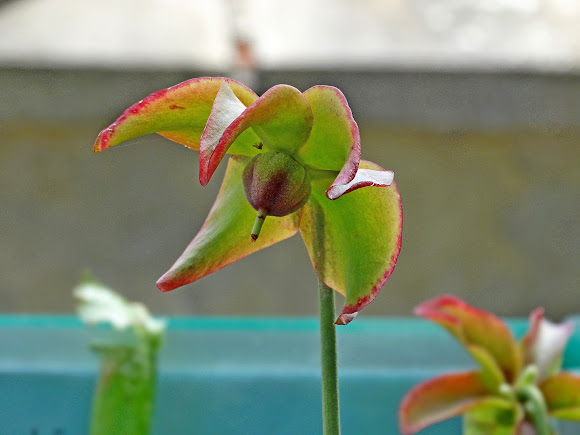 Trumpet pitcher fruit (1st photo) and insect trapping leaf (2nd photo). Sarracenia is a genus of carnivorous plants indigenous to the eastern seaboard of the United States, Texas, the Great Lakes area and southeastern Canada, with most species occurring only in the south-east United States (only S. purpurea occurs in cold-temperate regions). The plant's leaves have evolved into a funnel or pitcher shape in order to trap insects. The plant attracts its insect prey with secretions from extrafloral nectaries on the lip of the pitcher leaves, as well as a combination of the leaves' color and scent. Slippery footing at the pitcher's rim, aided in at least one species by a narcotic drug lacing the nectar, causes insects to fall inside, where they die and are digested by the plant with proteases and other enzymes.