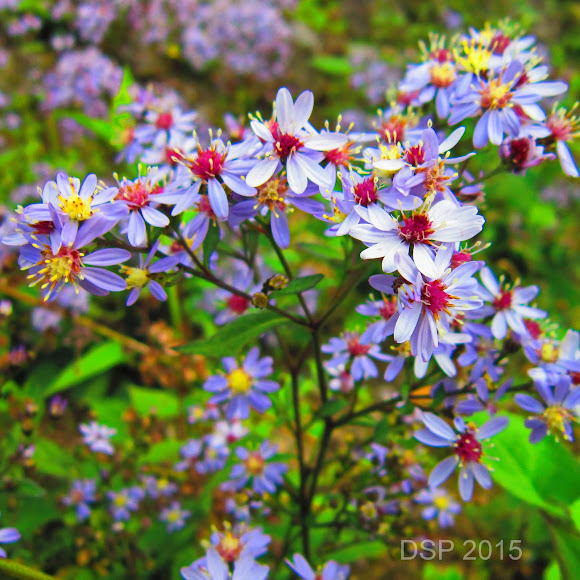 This perennial plant is 1-3' tall, branching occasionally in the upper half. The light green to reddish brown stems are usually glabrous; sometimes the central stem has sparse lines of hairs. The alternate leaves are up to 5" long and 3" across (excluding the petioles), becoming smaller as they ascend the stems; they are medium to dark green above and light to medium green below. The lower leaves are cordate, while the upper leaves are cordate-ovate or ovate; their margins are coarsely serrated. Leaf upper surfaces are glabrous, while their lower surfaces are either glabrous or there are hairs along the major veins. The narrow petioles of the leaves are about one-half to almost as long as their blades (up to 3½" in length); they are either unwinged or slightly winged, becoming shorter among the upper leaves. The upper stem terminates in a panicle of flowerheads about ½-1½' long. This panicle is longer than it is wide and it is more broad toward the bottom than the apex. When upper lateral stems are present, much smaller panicles may be produced. The central stalk, lateral branches, and peduncles of each panicle are light to medium green, terete, and glabrous to short-pubescent.

wide area, from Manitoba in the north west, east to Nova Scotia and Maine, south to Georgia and Alabama and west to Oklahoma. It grows primarily in mesic sites with soils that are rocky to loamy, but generally rich, at heights ranging from sea level along the coastal plain up to 1,200 m (3,937 ft) in the Appalachians. It can be found on open wooded slopes, along the banks of streams, on moist ledges, in swampy woods, along the borders of beech-maple and oak-hickory forests, as well as in clearings, thickets and along roadsides and ditches. It can also be found in urban areas where it is occasionally encountered as a weed species.

The nectar and pollen of the flowerheads attract many kinds of insects, including long-tongued bees, short-tongued bees, wasps, flies, butterflies, skippers, and beetles. Bees are particularly important pollinators of the flowers. Caterpillars of the butterflies Chlosyne nycteis (Silvery Checkerspot) and Phyciodes tharos (Pearl Crescent) feed on the foliage of asters (Symphyotrichum spp.), as do the caterpillars of many moth species (see Moth Table). Some moth caterpillars also feed on the flowers, developing seeds, stems, and roots. Other insects that feed on these plants include leaf beetles, the larvae of leaf-mining flies and fruit flies, plant bugs, stink bugs, lace bugs, aphids, and leafhoppers (see the Insect Table for a more complete listing of these species). Mammalian herbivores, including rabbits, groundhogs, deer, and livestock, browse on the foliage of asters occasionally. The Wild Turkey and Ruffed Grouse eat both the foliage and seeds to some extent.