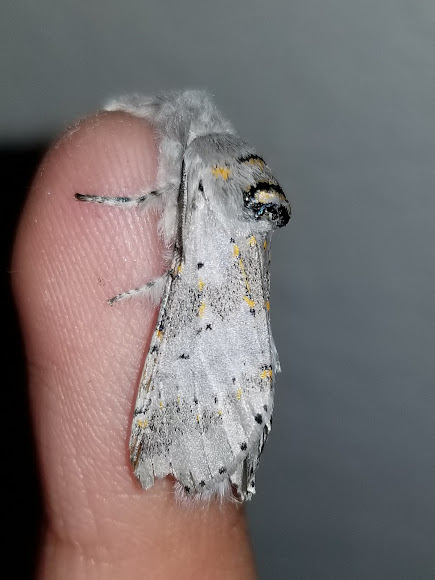 It is a small grey colored moth in the family Notodontidae. It has large grey fuzzy legs as well as grey wings decorated in black lines, and orange dots. On the thorax it has blackish blue scaling, that also had black and orange dots. The moth came from a caterpillar I found at McCord park, five months ago, and now hatched in the start of spring. The moth is similar to the groups Lymantriidae, Lasiocampidae, and Saturniidae, because it has no functional mouth parts to eat or drink, It uses lipids that it stores as a caterpillar, which will last it about a weeks worth of energy. The specimen seen has feathery antennae which it uses to pick up molecules of the females.

Ex-pupae, caterpillar found in October at McCord park near Lake Lewisville feeding on Willow, (Salix sp.). Area was shady and sunny with mixed trees and vines.

Furcula, Notodontidae, Noctuoidea, Lepidoptera, Insecta, Arthropoda, Animalia. It is found in the United States, southern Canada and the Northwest Territories.

Thanks, it sure is. The season started with lots of moths hatching.

Well done to grow it out. The season starts soon for you northeners.