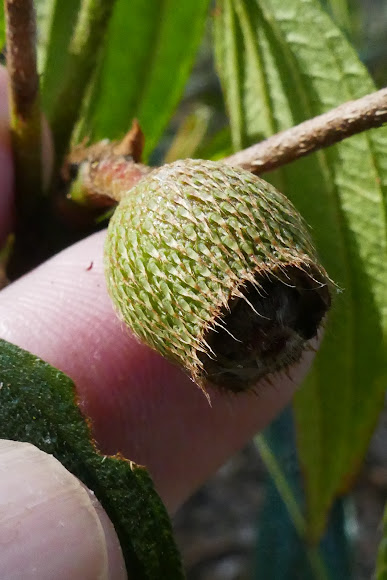 Not the lizard! Blue Tongue gets its name from its sweet, blue-black fruits that stain the mouth. It's also known as Native Lasiandra, or as Dhumulu to the Yolngu people. This is a bush tucker species, and the berries can be picked and eaten directly off the shrub. I think the berries are contained withing these pods, and they should split open when ripening. Just a guess, but I'll keep an eye on them to see what happens. In the wild, it grows in wet areas in sclerophyll forest, and is important as being a pioneer species that colonises disturbed wet-sclerophyll and rain forest habitats.

This spotting was found on the University of Queensland Campus, Brisbane. There is a bush tucker garden where various native species are cultivated. I'll keep an eye on this garden as I'd like to start cultivating some of my own plants. In Australia, this species can be found growing wild in the Kimberley region of WA, across the Northern Territory and Queensland, and as far south as Kempsey on the New South Wales coast.

I want to grow it. Report in due course.