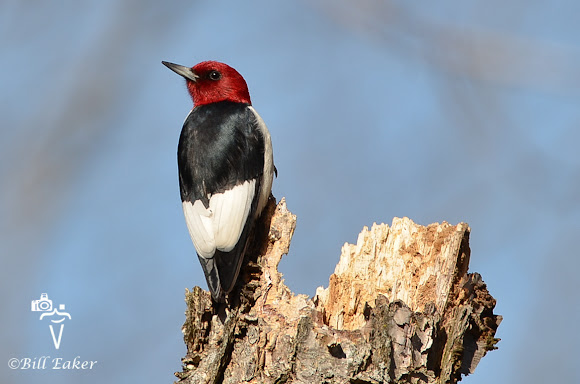 The Red-headed Woodpecker is so boldly patterned it’s been called a “flying checkerboard,” with an entirely crimson head, a snow-white body, and half white, half inky black wings. These birds don’t act quite like most other woodpeckers: they’re adept at catching insects in the air, and they eat lots of acorns and beech nuts, often hiding away extra food in tree crevices for later. This magnificent species has declined severely in the past half-century because of habitat loss and changes to its food supply -The Cornell Lab of Ornithology

There were two individuals playing peek-a-boo with me. They would both constantly hop to the other side of the tree and peek around. With a little patience, I finally captured one on top of a rotting tree.

Thank you very much Michelle!

Those pictures you took are beautiful!

Thank you very much williefromwi and Sergio:)

Thanks Antonio and armadeus! You're comments are always appreciated!

Your patience was beautifully rewarded Bill! Wonderful shots. Thank you for sharing :)

Thanks Stephanie! Glad we share the same stomping grounds, and thanks for telling me they were there!

This is such a beautiful photo Bill. You really captured the rich colors of this beautiful bird!

Thanks James! One of those rare moments where the light and composition was all in my favor:)

Thanks Jim! Just got back and after all day, no pileateds:). I heard them, but never got my lens on one. Yes, I feel blessed to live so close to the Mighty Mississippi. There are so many areas to explore, I could never get bored.

I envy your proximity to these spottings...and you took some great photos. Well Done, Bill! Good luck today.

Thanks Mark! Headed back to the same spot today to see if I can get some pileated woodpecker photos. This area is perfect for a wide variety of woodpeckers.