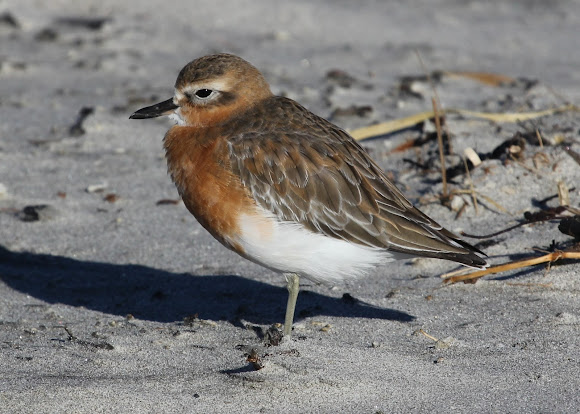 Also known as the Northern Red-breasted Plover. A medium sized wader about 26-28cm long and weighing in at 145gms. Grey/brown head dorsal surface with white on the face and over the eye as well as white lower breast and vent. Upper breast is a rusty red in breeding birds but often only shows traces of that in winter.

Found in the northern half of the North Island on most sandy or pebbly beach types quite often in esturine and rivermouth environments. These two were spotted on the Pukehina Spit near a Dotterel sanctuary in the Bay of Plenty.

Many places where these birds roost and breed have now become protected areas being marked of on public beaches as no go areas. Populations of this species seem to be on the increase although it is still classed as 'Near Threatened'. The much rarer Charadrius obscurus only breeds on Stewart Island.

Thank you Liana, my pleasure. Glad you enjoyed them.

Well...I hope their numbers just keep on keepin' on! Good luck to them! And I hope the numbers of the little southern species begin improving. Wonderful pics Rob. Thank you for the information and for sharing :)

Thank you Venusflytrap and Ines. I appreciate the comments.

Thanks Mark. These guys were teetering on the edge but the North Island species is doing reasonably well now. The southern species is still in a lot of trouble.