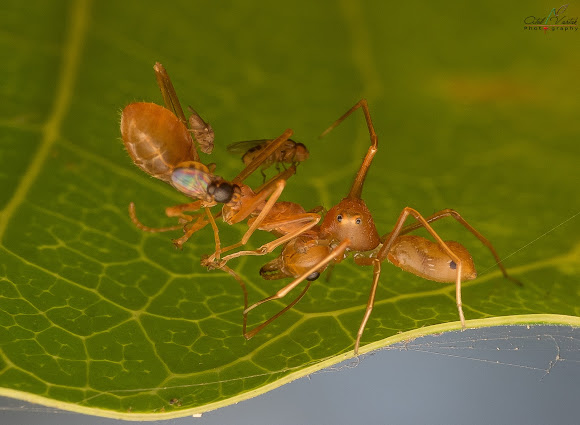 An Ant Mimic Crab Spider Amyciaea sp. preying on a Red weaver ant ...Oecophylla smaragdina.This spider stays in close proximity to the ant nests. It has only a generalised similarity to the Oecophylla smaragdina unlike the salticid Myrmarachne plataleodes which is a perfect example of mimicry ! It is an opportunistic predator though ... when the ant nest is disturbed and the ants are in a state of alarm ...thats when it grabs its meal ...once caught it suspends itself on a dragline where most of the meal is consumed ! Now comes the interesting part .... ! As soon as the meal is grabbed ...within seconds ... freeloaders arrive ! Freeloader flies are kleptoparasitic flies Family Milichiidae which feed on body fluids of the prey. One interesting interesting specialisation in these flies is myrmecophily...meaning living in close association with the ants. Another very interesting feature of Milichiidae behaviour is kleptoparasitism and almost all cases only the females are Kleptoparasitic . Males just hover around the prey for some some sex 😜 The arrival of these Milichiids doesn't seem to bother the spider one bit and it continues to inject venom and joy its kill ! Pic 1 shows the crab spider grabbing its prey and within seconds the freeloaders arriving on site. Pic 2 shows the spider suspends itself on a silk thread safe from the surrounding ants !

What a catch Atui. Congratulations.