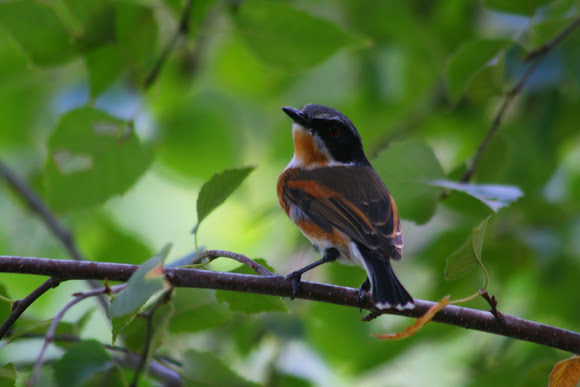 The Cape Batis (Batis capensis) is a small passerine bird in the wattle-eye family. It is resident in the highlands of southern and eastern South Africa and Zimbabwe. It is a small stout insect-eating bird, usually found in moist evergreen mountain forests and wooded gorges. The nest is a small neat cup low in a tree or bush. The Cape Batis is strikingly patterned. The adult male has a grey crown, black eye mask and white throat. Its back is brown, with a black rump and tail and rufous wings. The underparts are white with a broad black breast band and rufous flanks. The female and juvenile plumages differ in that the breast band is narrower and rufous, not black, and there is a small rufous patch on the throat. The rufous wings and flanks are a distinction from other Batis species in the region. Both the male and the female will aggressively defend their territory. When larger birds of prey, animals or humans approach, the bird will often perch conspicuously near the intruder and angrily protest audibly. The Cape Batis hunts by flycatching, or by taking prey from the ground like a shrike. The song is typically a triple whistle cherra-warra-warra or foo-foo-foo.

Brilliant!! Your best pic yet!!