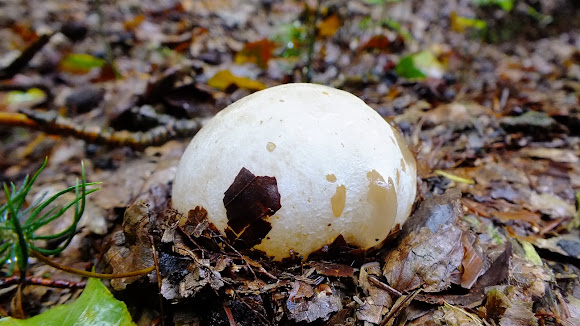 Phallus impudicus initially shows itself as an egg shape form in the ground from summer to late autumn, found in most woods and is very common. The egg sack pokes out of the ground and is half buried in the soil. It literally looks like a freshly shelled hard boiled egg planted right in the soil. The egg sack is quite soft and has a gelatinous feel about it, which would be the jelly like layer beneath. The egg soon breaks apart, showing the gloopy goo inside. That’s when you start getting the smell eeking its way out. After time, as it grows, the adult specimen shows its familiar shape which can grow up to 25cm high. But on average you’re looking at around 14cm. The tip or head has a distinctive bell shape that exudes spores from the tip. The head of the fungus is initially dark olive to black with the stinking spores. These are soon devoured and spread by insects in only a few days, leaving an unmistakable white honey comb pattern with raised ribs.

The stinkhorn can be found throughout much of Europe and North America, and it has also been collected in Asia and southeast Australia. In North America, it is most common west of the Mississippi River. Phallus impudicus is found in all kinds of woodland, but particularly common in coniferous forests. This saprobic fungus invariably appears near to dead tree stumps or other sources of rotting timber.

Looks for the egg , amazing spotting sure