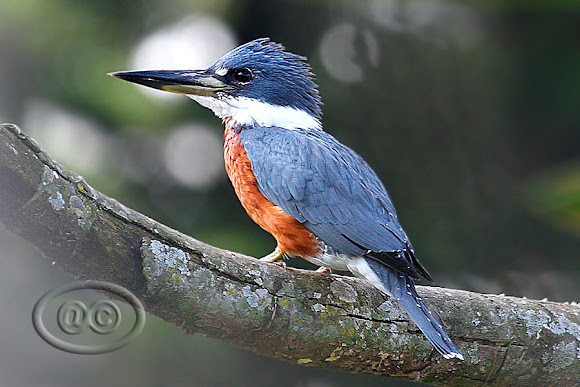 It feeds preferably fish which are displayed a high perch, generally close to the clean water collections. After locate prey, dives on it and, after capture, returns to the perch; with the fish between the jaws causes him to death, beating it against a hard surface. In the absence of a perch observation by the water can hang in the air "sieving", as do, for example, some hawks.

It occurs from Mexico to Tierra del Fuego in all of South America, being found near rivers, streams, ponds, lakes, ponds, mangroves and coastline. It is more common in open areas and in rivers and large ponds. But not suit dammed for hydroelectric lakes in the south and southeast, usually devoid of bounds where it nests, or perhaps by the turgidity of the backwaters and the absence of roosts in deforested banks.

Lands on dry logs and rocks at water's edge, in tall trees, wires and fence posts. He lives most of the time alone. Goes from island to island, appears in small pools to discover during their long flights; enough to fly over mountains and cities, running local migration in the Amazon.

The town of the coordinates that I gave for search, is not DUQUE DE CAXIAS, as reports the search map of this page, but PETRÓPOLIS.