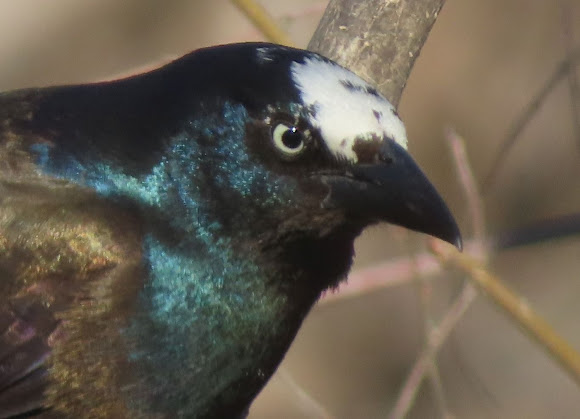 This is a rarity to say the least. Grackles are normally medium sized (12"), completely black birds with a purple sheen to the head and neck. They have a dark bill and yellow eyes. This one also has a white crown on the front of it’s head. Some form of Leucism, I imagine, and very unusual. The pictures are of the same bird, the second 2 through window glass. Compare with a normal Common Grackle here: https://www.projectnoah.org/spottings/17...

This bird was seen as part of a flock in our backyard in eastern Nebraska, USA (330 masl).

The first time I saw this bird I assumed it had bird droppings on its head. That in itself would be unusual so I snapped a few pictures. Blowing them up on the computer I saw they were indeed white feathers. I have sent pictures of this bird to the Nebraska Game and Parks Commission but haven’t heard anything back. I see pictures online of Grackles with various body parts that are white, but it is extremely rare.

Rara indeed. I was a little disappointed when I found other examples on the internet, but still, I think it was pretty cool. Thanks Sukanya.