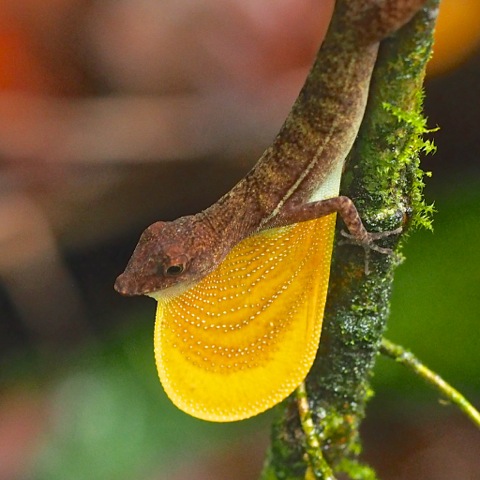 A small brown and white speckled lizard displaying a beautiful yellow dewlap. Seen in the jungle of SW Costa Rica. Active during daytime.

Osa Peninsular. Endemic to the Gulf of Dulce, Costa Rica

They are athletic creatures that run fast, and jump many times their length. They can also climb straight up almost any surface at blinding speed. They usually sit downward. Seeing a potential prey they dart down towards it. They display their dewlap and bob their head to attract sexual partners and to mark their territory. They feed on spiders and insects like cockroaches and mosquitoes.

Beautiful shot! I wasn't so lucky, it was very dark when I spotted this wonderful creature.

thanks Mark.. definitely showing off. Posed like that for quite a while.

Wow, thank you Malcom for nominating this anole with the beautiful dewlap as SOTW. Nature is so amazing... I wonder if it thought it would frighten me off ! But instead it drew mw nearer !!

What a showoff. Well done Pam.

You got the timing right :) Almost 9 pm here, which surely means I am sitting on the couch with my laptop in my lap ;)

thanks Ashley. I was hoping you were online ! Tried to time it for the US evening. It's early morning here in India...

The dewlap showing is about the only way to have hope of identifying anoles in the tropics, very nice photos!