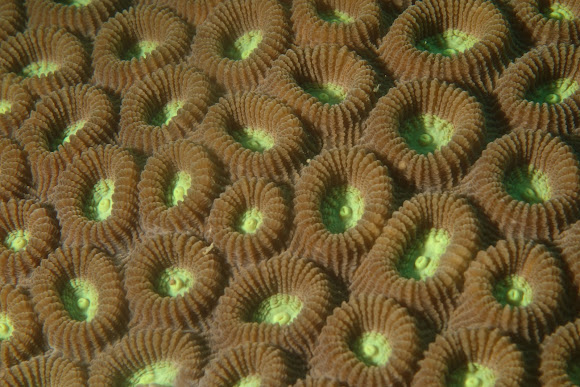 Pic#1 shows close-up of the individual polyps, which are less than 1 cm in diameter. Pic#2 shows the whole colony. The polyps are usually closed during day time and opens up at night, showing its tentacles for feeding. A coral "group" is a colony of myriad genetically identical polyps. Each polyp is a sac-like animal typically only a few millimeters in diameter and a few centimeters in length. A set of tentacles surround a central mouth opening. An exoskeleton is excreted near the base. Over many generations, the colony thus creates a large skeleton that is characteristic of the species. Individual heads grow by asexual reproduction of polyps. Corals also breed sexually by spawning: polyps of the same species release gametes simultaneously over a period of one to several nights around a full moon.

Thanks too, @Ashley for the nomination.

My favourite Coral. Thanks for sharing this beauty ! I have embroidered this on a cushion cover - very intriguing.