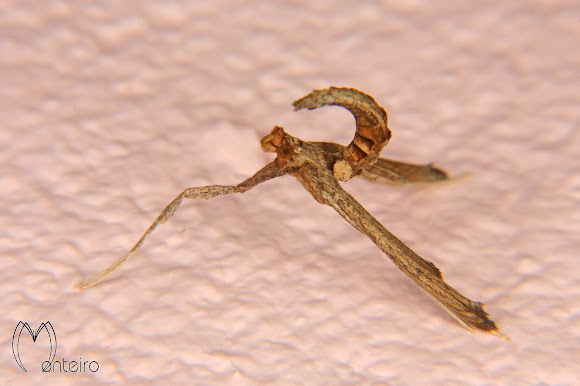 The following text is taken from the "Moths of the Andes": " The multitude of bizarre postures adopted by neotropical moths never fails to amaze me, and this species is surely amongst the weirdest. When it first settles the moth holds its abdomen straight, but after 3 or 4 minutes it very gradually curves it into the scorpion-like posture depicted above. The feathery antennae meanwhile are retracted and laid flat along the moth's back, and the huge labial palpi are swept back over the head. A moth with attitude ! Until recently the Crambidae and Pyralidae were grouped together as Pyralidae, but the most recent revision by Munroe & Solis in 1999 classifies both as full families within the superfamily Pyraloidea. The Pyralidae comprises of about 6,150 known species worldwide, although the true number must be considerably higher, as these moths are generally small and a high percentage of them are dull and inconspicuous. The family is divided into 5 subfamilies, with the Epipaschiinae containing about 600 species, all of which are tropical. The taxonomy of the Pyralidae and Crambidae however are both still in disarray and the current classification is certain to change as more is learnt."

great spotting, looks to be a species of plume moth

That is a totally bizarre creature! I would never have picked that as any moth species in a million years. Looks about as flight-worthy as a garden snail !! Thanks for sharing, Sergio. Excellent photos and notes too.