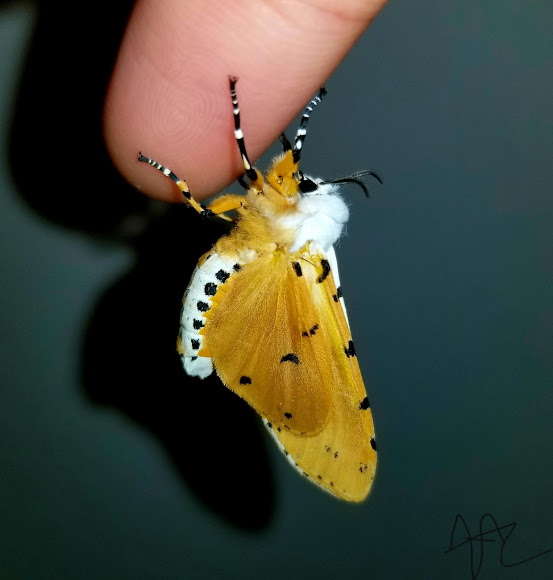 It is another male salt marsh moth that was bred by me from egg to adult.The moth Is a newly hatched male that is yet to dry it's wings.It has orange on the hindwings and orange on the back of the forewings with black and white on the legs and wings.It is slightly toxic because of the toxins it takes from it's foodplants that were different types of weeds including clover,dandelion, and others that are commonly found here.When you touch the moth it will realease those toxins out of it's thorax, that it a transparent yellow substance.It is made up of alkaloids.These moths that I bred will be released back into the wild so the population of these moths can grow.This species is rather uncommon and can be found only at lights.This specimen was the last and i just wanted to show it.

It lives in many habitats but can mainly be found in grasslands that consist of species of weeds and grasses.The species was originated in africa but then came here by accident, in places like congo they prefer grassy places like hilltops and grasslands, and they are also semi-tropical species living in dry and wet places.

It is male specimen with orange black and white colors on the wings.