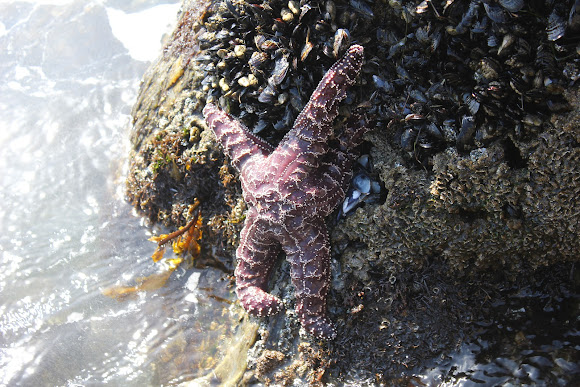 "The ochre sea star or purple sea star is a commonly encountered starfish on rocky beaches from Baja California to Prince William Sound, Alaska. It has also been found in water up to 100 meters in depth. The ochre sea star is a major predator of California, edible and bay mussels, and barnacles, limpets and snails among other species. It comes in a variety of colours. In the protected waters of Puget Sound and the Strait of Georgia, the ochre star is predominantly purple coloured but in other areas, a bright orange and almost yellow phase is also found. It is a very rigid sea star to 25 centimeters across. The ochre star opens its prey using hydrostatic pressure via hundreds of tiny tube feet to latch on to the shells of its prey, tugging until they open, and then extruding its stomach into the opened shells. The ochre star feeds mostly in summer and moves into deeper water to estivate in the winter. Gonads begin to grow in January and spawning occurs from May to July in British Columbia. A 400 gram sea star can release up to 40 million eggs that then become larvae in the plankton for up to six months. The same filter feeding mussels that it will eat as an adult sea star could dine on the larval sea stars if it were not for an offensive tasting chemical defence produced by the larvae. Sea stars mature at about 5 years of age and live for 20 or more years. In 1988 a parasitic ciliate Orchitophyra stellarum originating from the Atlantic was found to be castrating male sea stars in British Columbia." -pwlf.org/ochreseastar.htm