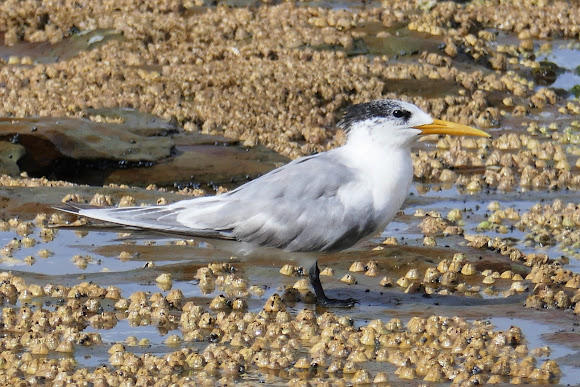 Thalasseus bergii, known as the "crested tern" in Australia, is a tern in the family Laridae, which also includes gulls and skimmers. It nests in dense colonies on coastlines and islands around the continent. There are five subspecies globally, but the local subspecies T.b.cristata, ranges from Australia to PNG, and into southeast Asia. During the breeding season, the adult has a distinctive black cap with a long crest, white neck and underparts, and a grey back and upperwing. In contrast, the non-breeding adult has a white crown with limited dark spotting, but its hind-crown remains black. The large bill is greenish-yellow to yellow, and the legs are black. The juveniles primarily differ from the adults in having heavily mottled or barred brown upperparts. Everything else you could ever want to know about this species can be found at the reference links. Wikipedia is extensive. PS: The barnacles seen in these images are Tesseropora rosea, aka rose-coloured barnacles.

These birds were spotted on the rock platform at Terrigal Haven, just below one of the headlands at Terrigal Beach on the NSW Central Coast. Though the crested tern is usually a strictly coastal species, there are occasional records in the arid interior of Australia, where birds were possibly blown by passing tropical cyclones!

Conservation status is secure in all Australian states and territories, with the exception of Victoria where its status is near threatened (NT).

Thanks, Liana. 3rd pic should be 1st pic? I've seen these birds at this location many times, but never got around to adding the spotting.

Nice shots Neil. Love the 3rd pic and reading your notes. Thank you for sharing :)