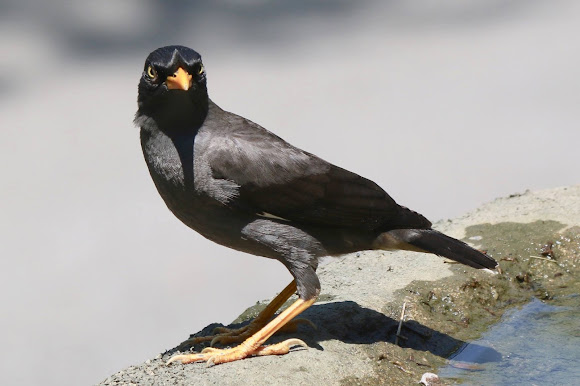 The common myna is readily identified by the brown body, black hooded head and the bare yellow patch behind the eye. The bill and legs are bright yellow. There is a white patch on the outer primaries and the wing lining on the underside is white. The sexes are similar and birds are usually seen in pairs.

Spotted at Taman Tasik Perdana park, Kuala Lumpur, Malaysia. The range of the common myna is increasing at such a rapid rate that in 2000 the IUCN Species Survival Commission declared it one of the world's most invasive species and one of only three birds in the top 100 species that pose an impact to biodiversity, agriculture and human interests. In particular, the species poses a serious threat to the ecosystems of Australia where it was named "The Most Important Pest/Problem". (Wikipedia)

is a member of the family Sturnidae (starlings and mynas) native to Asia. An omnivorous open woodland bird with a strong territorial instinct, the myna has adapted extremely well to urban environments.