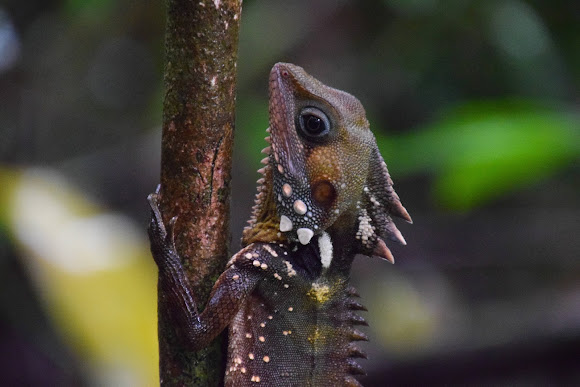 The forest dragon is a medium sized lizard with a pointed crest behind its head. It is mostly olive brown with brighter patches of yellow,black and white on its body. There is also some pink and brown tinting that makes it very distinctive. Although this lizard possess some bright colors, it is very well camouflaged in the forest.

Boyd's forest dragon is found only in the rainforests in northeastern Queensland, Australia. It is found mostly in trees in the rainforests, but can be seen basking in the sun on rocks or paths. It feeds on small insects and other invertebrates.

Thank you so much Lauren, Neil, Reza, Mark, and Luis! I appreciate your kind words!

Thank you very much Ashley! I am very honored to have this beautiful lizard chosen as Spotting of the Day!

A great spotting. I've never seen one of these guys before. Congrats on your SOTD.

Congrats. Sorry I missed this one before. Wonderful looking dragon.

Congrats Stephanie, this beautiful lizard has been chosen as Spotting of the Day!

Thank you Reza and Bill!

Thank you Christiane! No, I am not in Australia. I vacationed in Australia, New Zealand, and Fiji last year. I loved every minute of my travels, and hope to return some day.

Are you travelling in Australia at the moment?

One of my favorite dragons.. Love it! Thanks for sharing..