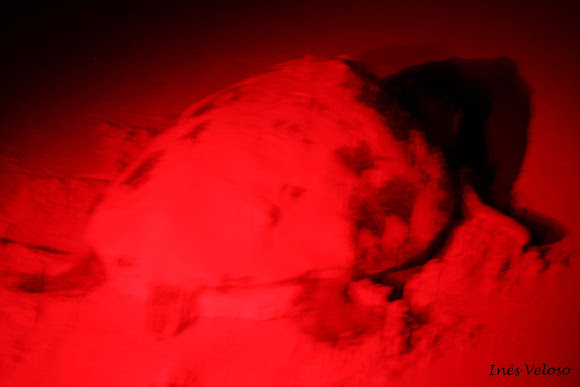 I came across this turtle while i was in a nocturnal tour along the coast of Boavista Island (Cabo Verde) meant to try to watch this animals laying eggs. I was lucky enough to find this female and watch her lay her eggs. We were only able to use red lights so that the turtle wounldn't be disturbed, and we weren't allowed so get very close to her, so that she wouldn't be scared. She probably wouldn't have layd her egg if she felt distressed.

The loggerhead sea turtle is found in the Atlantic, Pacific, and Indian Oceans, as well as the Mediterranean Sea. It spends most of its life in saltwater and estuarine habitats, with females briefly coming ashore to lay eggs.

The loggerhead sea turtle has a low reproductive rate; females lay an average of four egg clutches and then become quiescent, producing no eggs for two to three years. The loggerhead reaches sexual maturity within 17–33 years and has a lifespan of 47–67 years. Loggerheads are considered an endangered species and are protected by the International Union for the Conservation of Nature.