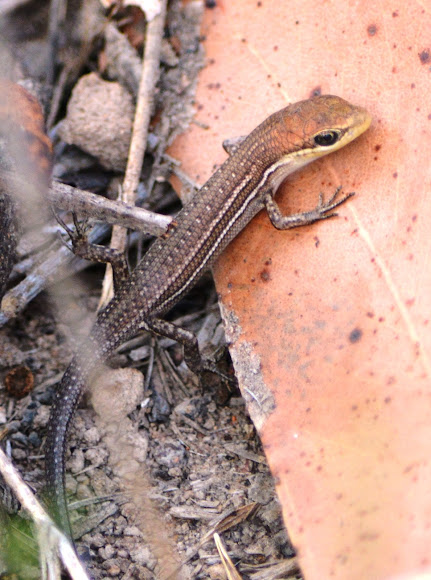 Found in dry woodland leaf litter in early morning scurrying with other species of sun-skink juveniles in north east NSW.

It stopped briefly and stared up at me posing for a few photos. It appeared very distinctly different from the lizards it was mixing with and I saw no others similar to it then or since.

That's definitely it NathBig! The juvenile photo! And that's exactly what the lizard was that I photographed - a juvenile. Thanks for that. The juveniles do look different from the adults.

I'm fairly confident it's a Carlia. Vivax was one of the few I saw that occurred close to your range. Carlia tetradactyla was more in the right range, but the adults didn't look much like it. I've found a juvenile photo of that though, and it looks pretty close, I think that's what it is. Check out the photo here - http://hvbackyard.blogspot.com.au/2007/0....

Thanks NathBig for suggestion on species ID, I appreciate your help. Had a look at some of the images & couldn't quite see one that matched - number 13 in the photo series on that site would be closest. They must vary throughout the regions? If it is this species it would be just outside its specified range. I've not seen one in this region before, maybe someone else has though.

Any ideas on exact ID would be welcome.