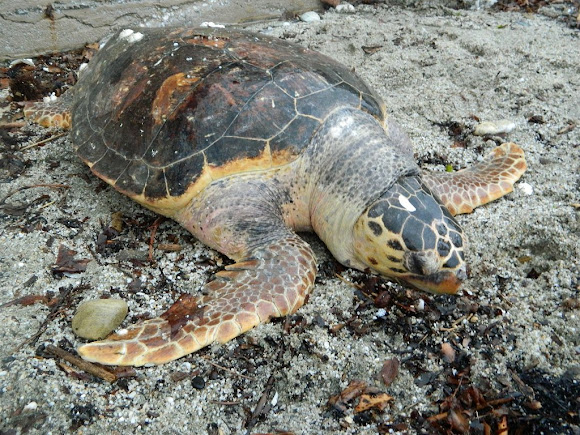 A dead Loggerhead sea turtle (Caretta caretta), spotted and photographed ιn Papa Nero beach, Pelion mountain, Greece. The species is fully protected by the Greek law, and it requires to inform the Coastguard, and the the Sea Turtle Protection Society of Greece (ARCHELON) of any finding concerning the caretta caretta sea turtle. The turtle was spotted washed ashore twice, since the high seas were dragging her back in the water. She had no open wounds and she was almost immaculate, except from the slight damage in the upper surface of the carapace, as a result of the decomposition and the continuous beating on the rocky shore. It is estimated that she was about 1 meter long, and probably near 60-70 kilos in weight. (she was firstly found floating upside down, and my husband Michael, tried to turn her so that he would check her and help her in case she was still alive...Unfortunately she was dead)

The Loggerhead Sea Turtle Caretta caretta recently changed category in the IUCN (International Union for Conservation of Nature or World Conservation Union) global Red List of threatened species. More specifically, from the category “EN – endangered” which had been assigned since 1996, it became “VU-Vulnerable”, after a recent assessment by the Marine Turtle Specialist Specialist Group of IUCN Red List Assessment of the Loggerhead Sea Turtle Caretta caretta in the Mediterranean: long term protection pays off...