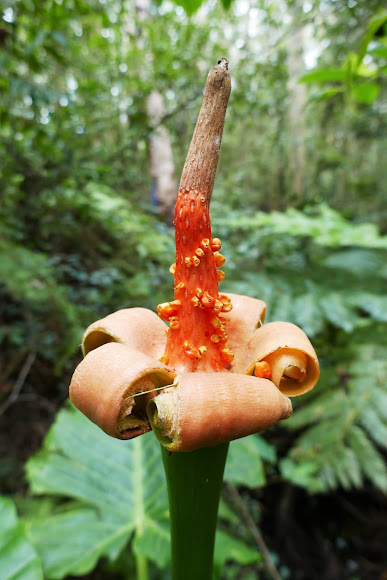 Cunjevoi lily, aka elephant-eared cunjevoi, is a species native to rainforests of eastern Australia, and this is the first time I have ever seen the plants flowering, or at least fruiting. I was a bit late for some and too early for others, but you get the idea. The summer flowers are a perfumed, greenish-cream colour that is similar to an arum lily, and red fruits follow the flowering. The seeds are not unlike corn kernels, but perhaps the fleshy fruit was eaten by birds or simply dropped off? These plants can be found growing as an understory plant along rainforest margins and in riparian areas along waterways, especially in places where there is a gap in the canopy to allow light in. Alocasia may grow to a height of 1.5 metres. This species is poisonous to humans and is a known cause of toddler deaths. It also poses a real danger to animals like cats and dogs. However, this is an important host plant for the caterpillars of at least four species of Hawk Moth as well as the Crow Moth (Cruria donowani). The fruit can also be eaten safely by birds which then disperse the seeds. NB: Other than both being Australian natives, cunjevoi (the plant) bears no resemblance to cunjevoi (the marine animal).

This spotting was in a moist, well-shaded gully amongst dense undergrowth in the Cumberland State Forest, in Sydney's northwest. Larger trees such as blackbutts, red gums and blue gums, overshadowed the entire area. Here's some park info: https://www.forestrycorporation.com.au/v... Alocasia brisbanensis is endemic to the warmer coastal and inland-coastal areas of Australia's east coast, from just south of Sydney in the Illawarra region all the way up to far north Queensland. However, it has now been naturalised in some areas of both Victoria as well as in Western Australia where it’s considered a minor environmental weed. It has also naturalised in New Zealand.

This reference provides a wealth of information on this plant, including: habitat, flowering and fruiting, poisoning, and indigenous uses by aboriginal Australians. https://dengarden.com/gardening/Cunjevoi...

Cheers, mate. This is such a delightfully pretty specimen too :)

Thanks, Tukup. The second reference link (factsheet) shows a decent image of the inflorescence and fresh fruit. It actually does look lie a lily. Just click on each image to enlarge.

Wow Neil. I would never have thought "lily." Congratulations on the (past) nomination for SOTW and the current, well-deserved SOTD.

Thanks, Sukanya. It certainly was a weird-looking thing.

Oh wow, thanks very much, Daniele. Much appreciated. And thanks, Mauna. It was an odd spotting. I'll keep an eye open for a fresh flower.

What better way to promote your new mission than a Spotting of the Day Neil! Fantastic fruit too. Congratulations!

"This strange structure is a fruiting Cunjevoi Lily (Alocasia brisbanensis), a poisonous flowering plant in the family Araceae native to rainforests of Eastern Australia. Check out the spotting for more information and images of the whole plant: https://buff.ly/2vPdHYP
Spotted in the Cumberland State Forest, New South Wales, Australia, by Neil Ross. Neil has just created a new mission of Project Noah dedicated to Australian native flowers and fruits. Of particular interest in this mission are plants considered to be "bush tucker" (bush food) for people and a source of food for animals. Check all the details here: https://buff.ly/2He0j67 "

Thanks, Maria. There is no definitive answer on why both species bear the same name. I do love a good mystery :) http://languagehat.com/cunjevoi/

Very interesting spotting, Neil! The additional note on the plant and a marine animal having the same common name was also interesting.

Thank you for the nomination, Ashley. Much appreciated. And the aware for the most toxic plant, Martin? I like the sound of that.

Well done Neil. I do not recall seeing them flower in Victoria. I do know several arum lillies that are also weeds and have toxic sap. I would give you the award!

Cheers, Mark. It's the first time I have ever noticed this. I'll try and spot the fresh flower next time, not just the daggy old fruit dregs.

Thanks, Brian. This was the first time I ever saw one flower. Quite a bizarre-looking thing despite being well-past its prime.