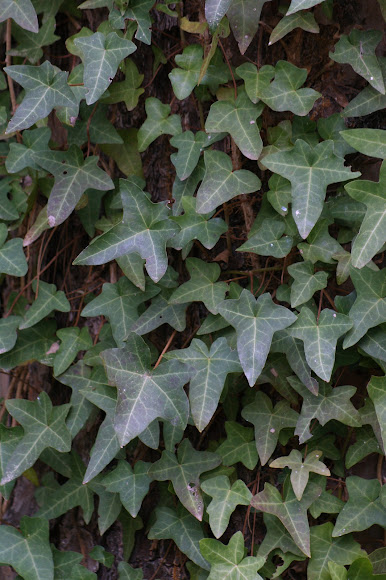 It is an evergreen climbing plant, growing to 20–30 m high where suitable surfaces (trees, cliffs, walls) are available, and also growing as ground cover where there are no vertical surfaces. It climbs by means of aerial rootlets with matted pads which cling strongly to the substrate. The leaves are alternate, 50–100 mm long, with a 15–20 mm petiole; they are of two types, with palmately five-lobed juvenile leaves on creeping and climbing stems, and unlobed cordate adult leaves on fertile flowering stems exposed to full sun, usually high in the crowns of trees or the top of rock faces. The flowers are produced from late summer until late autumn, individually small, in 3–5 cm diameter umbels, greenish-yellow, and very rich in nectar, an important late autumn food source for bees and other insects. The fruit are purple-black to orange-yellow berries 6–8 mm diameter, ripening in late winter, and are an important food for many birds, though somewhat poisonous to humans.

Native to most of Europe and western Asia. Widely cultivated as an ornamental plant in the United States. It is considered an invasive species, because it spreads rapidly. This one was photographed at Heggies Rock near Appling (Columbia County), GA.

It is widely cultivated as an ornamental plant. Within its native range, the species is greatly valued for attracting wildlife. The flowers are visited by over 70 species of nectar-feeding insects, and the berries eaten by at least 16 species of birds. The foliage provides dense evergreen shelter, and is also browsed by deer. The species can become a nuisance in gardens, rapidly colonising hedges, trees and borders if not kept in check. It can even invade neglected lawns. Over 30 cultivars have been selected for such traits as yellow, white, variegated (e.g. 'Glacier'), and/or deeply lobed leaves (e.g. 'Sagittifolia'), purple stems, and slow, dwarfed growth.