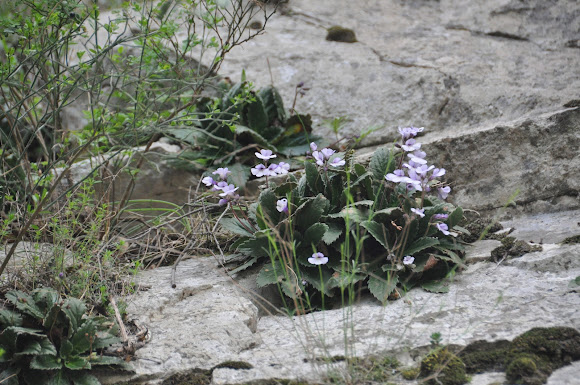 This plant is endemic to Bulgaria and Greece and is one of the relict elements of the tertiary times. It is found in northeastern Greece, the Central Balkan mountains and Thracian plain and Rhodopi mountains (Menikion, Pangeon, Falakron, Rodopi, Papikion and the Nestos river gorge). The extent of occurrence is estimated to be smaller than 20,000 km².

This perennial herb grows in damp shady rocky places, mainly on limestone and sometimes also on volcanic rock. It can survive without water for more than three years.

Hello IliasRiverland, and Welcome to the Project Noah community! We hope you like the website as much as we do. There are many aspects to the site and community. The best way to get started is to read the FAQs athttp://www.projectnoah.org/faq where you can find all the tips, advice and "rules" of Project Noah. You, like the rest of the community, will be able to suggest IDs for species that you know (but that have not been identified), and make useful or encouraging comments on other users' spottings (and they on yours). There are also "missions" you can join and add spottings to. See http://www.projectnoah.org/missions Note that most missions are "local". Be sure not to add a spotting to a mission that was outside of mission boundaries or theme. Each mission has a map you may consult showing its range. We also maintain a blog archivehttp://blog.projectnoah.org/ where we have posted previous articles from specialists from different geographical areas and categories of spottings, as well as wildlife "adventures.” So enjoy yourself, share, communicate, learn. See you around!