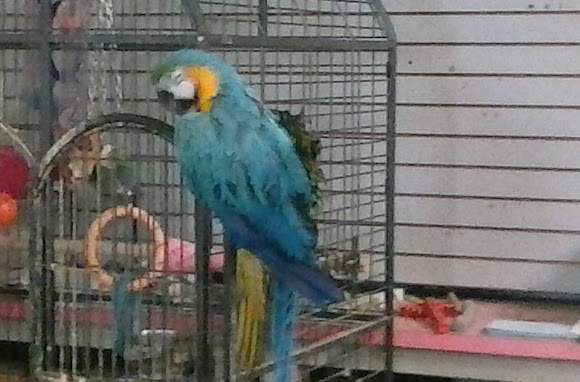 First of all, apologies for the blurry pic, my phone camera was messing up. We have these guys at the Riverside Zoo here in Indy, but it was when I went to a pet store to browse in Parsons that I saw one outside a cage. It was the pet of the owner, which is fun, because I didn't know you could have a pet macaw.

This species occurs in Venezuela and south to Peru, Brazil, Bolivia, and Paraguay. The range extends slightly into Central America, where it is restricted to Panama. The species' range formerly included Trinidad, but it became extinct there by 1970 as a result of human activities. Between 1999 and 2003, wild-caught blue-and-gold macaws were translocated from Guyana to Trinidad, in an attempt to re-establish the species in a protected area around Nariva swamp. A small breeding population is found in Puerto Rico.