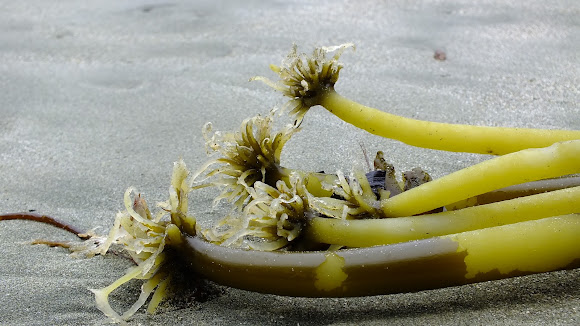 Postelsia palmaeformis is a species of kelp and classified within brown algae. They look like miniature palm trees (palmaeformis means having the shape of a palm tree) and are up to 60 cm tall, and have a hollow, cylindrical stipe that is often curved and tapers upwards. At the base of the stipe is a rather small but densely branched holdfast, and at the other end the stipe has numerous branches, each of which carries a single, drooping blade. The blades are straplike and have toothed margins. A single individual can have up to one hundred or more blades, each up to 25 cm long, and additional ones can be produced through the splitting of pre-existing blades. Pneumatocysts (air-filled bladders) are lacking. This seaweed grows in dense patches on rocks in areas where it is exposed to extreme wave shock. It usually grows in clumps in beds of the California mussel (Mytilus californianus), where it colonizes patches of rock bared by the removal of mussels by predators, storms or drift logs. It can also overgrow barnacles or other algae, causing them eventually to be ripped off the rock and providing new sites for sea palm settlement. Spores develop in grooves on both sides of the blades in late spring. They are released during low tide, and so drip down onto nearby rocks where they adhere quickly, limiting most dispersal to distances of 1 to 5 meters. Long-distance dispersal is probably effected by floating individuals that have been ripped off the substratum. Within a clump, the individuals are siblings.

Sea palms are found on the rocky shores of western North America, from as far north as Vancouver Island, to the southern central coast of California. They live in the middle to upper intertidal zones in very wavy areas. High wave action may increase nutrient availability and moves the blades of the thallus, allowing more sunlight to reach the organism so that it can photosynthesize.

These specimens fit the description of Postelsia palmaeformis, except that they were missing blades on one end of their stipe . Spotted on the beach of Half Moon Bay, Pacific Rim National Park Reserve, Vancouver island, Canada. (sources: see reference)