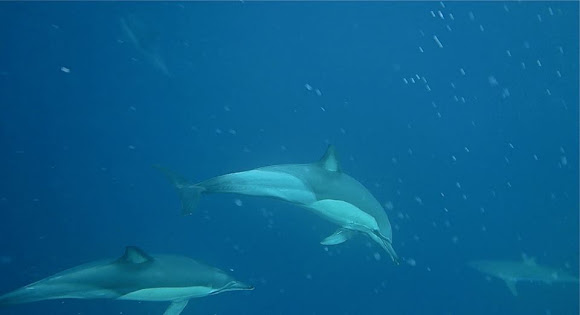 Common dolphins attain 2.5m, and are less robust in appearance than bottlenose dolphins. The body is dark-brown to black with characteristic, orange-brown, ‘figure of eight’ markings on the sides and a creamy-white underbelly. The head slopes gently forward to a long narrow beak and the dorsal fin is prominent, slightly hooked and triangular. A dark stripe extends up from the pectoral fins to the lower jaw and another joins the back of the beak to around the eye.

Common dolphins are found offshore in most temperate to tropical waters.

This sighting was spotted on a trip to South Africa during the season of Sardine Run. During this period, millions of Sardines migrated northwards along the Eastern Cape of South Africa and during this period, lots of predators (Whales, Sharks, Dolphins, Birds, Marlins, Sail Fish among others) will hunt among the Sardines. Usually, it is the Dolphins that 'herds' the Sardines into tight bait balls and then the other predators will join in the hunt.