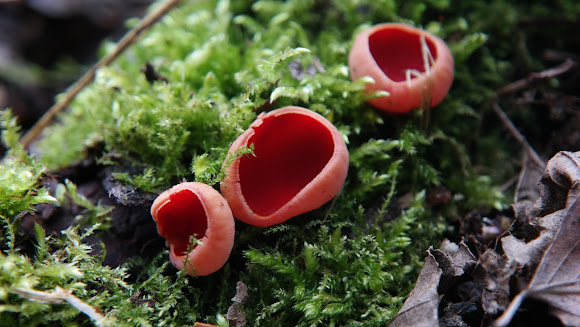 This species is found growing on fallen pieces of dead hardwood among mosses and leaf litter in damp habitats in winter and early spring. The fruiting body is cup-shaped with a scarlet smooth, shiny interior. The exterior is covered with a felted mass of short hairs in varying shades of white and pink and a stubby stem. The flesh is white and rubbery with a thin red layer lining the cup. The spore print is white and the spores are ellipsoidal with flattened ends and containing several oil droplets. On the outside of the cup the hairs are curly or corkscrew shaped. These features distinguishes this species from the rather similar Sarcoscypha coccinea and Sarcoscypha jurana.

Grows on the dead wood of such hosts as Alnus incana, species of Salix, Acer and Robinia.[4] It is part of a complex of species which includes Sarcoscypha coccinea and Sarcoscypha dudleyi.