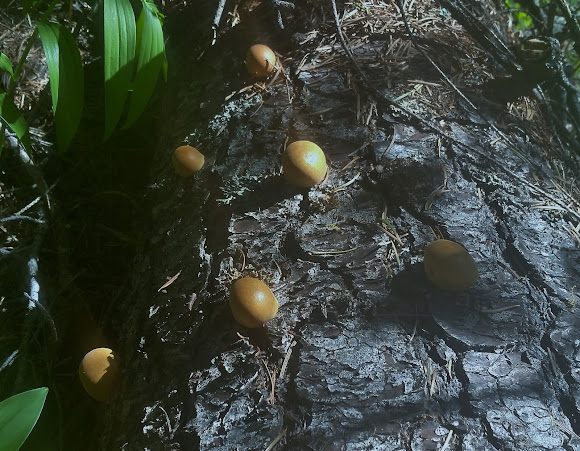 Ecology: Saprobic on the deadwood of conifers; growing alone or gregariously, often on trees that were killed by fire, insects, or other causes in the previous year; summer and fall (and winter in coastal California); widely distributed in North America; causing a soft, grayish brown rot in the outer few centimeters of the sapwood; apparently among the first wood-rotting fungi in the line of succession, and rarely found more than a year or two after the tree has died. Cap: Up to 5 cm across; more or less spherical in appearance; smooth or with a lacquered gloss; yellowish, cream colored, or tan. Pore Surface: Covered by a "volva" which results from the extension of tissue from the cap margin; pale to dark brown; with 4-5 circular pores per mm; tubes to 6 mm deep.

Spotted on a log in a pine and fir dominate forest.