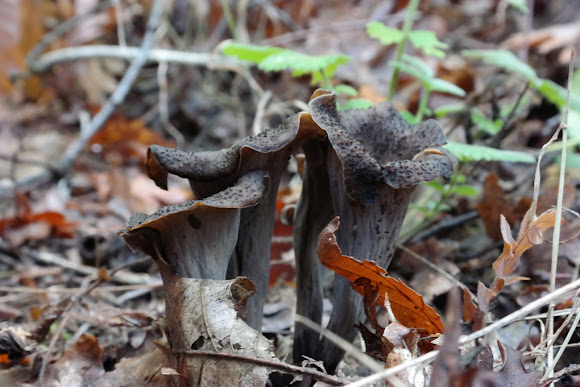 This classic European species was first named and described by Linnaeus (1753), and is often called the "black trumpet" in English, or trompette de la mort in French. It is deeply vase-shaped, and its surfaces are dark gray to black. As the mushrooms mature, the outer surfaces develop a whitish to cream-colored sheen, resulting from the maturation of spores. Recent research by Matheny and collaborators (2010) supports the idea that Craterellus cornucopioides does not occur in North America, where it is replaced by Craterellus fallax in eastern North America, and a probably as-yet unnamed species (Craterellus species 01) on the West Coast. The genetic difference between Craterellus cornucopioides and Craterellus fallax is paralleled by a morphological difference (which is good news for those who get lost and don't know which continent they're standing on): the spore print of the former is white to creamy, while the latter species has a pinkish yellow spore print.