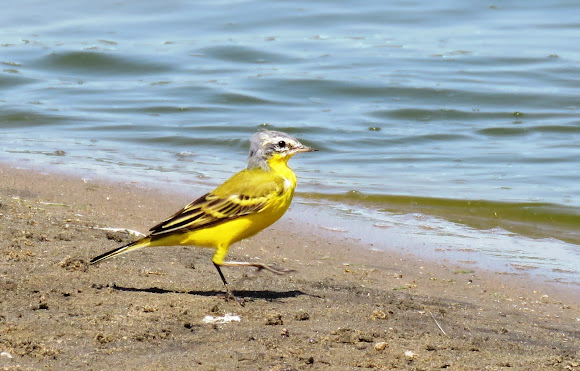 Yellow wagtail is small bird, slightly bigger than a sparrow, with some 15 - 16 cm in length. It has the olive-green back. This species of Motacillidae (Wagtail, Longclaw) family is highly variable, and the coloring of head and the amount of yellow depends on sub-species - there are at least 10 ssp accounted for in Africa. This specimen looks like the 'beema' sub-species (?need confirmation?) - light grey head with strong white supercillium, and another white streak on the side of the chin. The amount of yellow is abundant and quite flashy. Juvenile and non-breeding birds are similar in all sub-species, buff-yellow abdomen and whitish neck and chest. Photo 1 and 2 shows a male in a full breeding attire; photos 3 to 5 shows a moulting male, an immature just assuming the breeding plumage.

Lake Turkana is saline desert lake and the biggest water mass of Rift valley lake system. Currently, this lake is in danger - over the past decade, Ethiopia has embarked on a massive plan which includes constructing dams, developing water-intensive irrigated cotton and sugar plantations, and irrigation canals and other infrastructure in Ethiopia’s Omo River Basin. These developments are predicted to dramatically reduce the water supply of Lake Turkana, as Omo River provides 90 percent of the water in it. Dramatic reductions in freshwater input from the Omo River into Lake Turkana will increase levels of salinity in the lake and raise water temperatures, decimating fish breeding areas and mature fish populations. Higher air temperatures will increase rates of evaporation, further increasing salinity while reducing biological productivity... which would later on influence the entire ecological system.