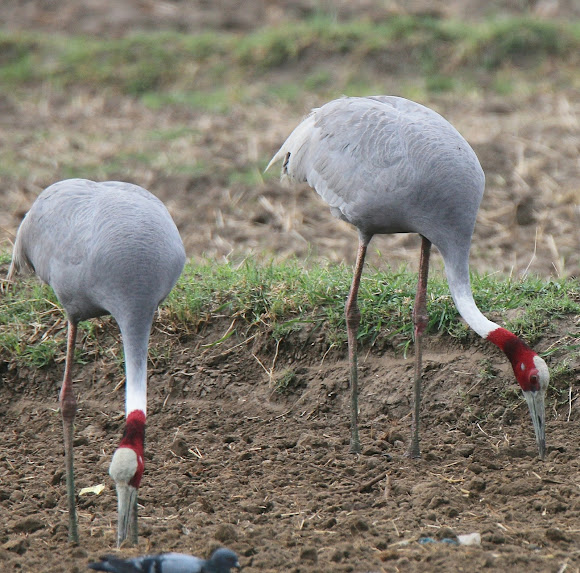 Spotted this beautiful pair at Thol bird sanctuary.They form long-lasting pair-bonds and maintain territories within which they perform territorial and courtship displays that include loud trumpeting, leaps and dance-like movements..Sarus cranes have loud trumpeting calls. These calls are, as in other cranes, produced by the elongated trachea that form coils within the sternal region.Pairs may indulge in spectacular displays of calling in unison and posturing. These include "dancing" movements that are performed both during and outside the breeding season and involve a short series of jumping and bowing movements made as one of the pair circles around the other. Dancing may also be a displacement activity when the nest or young are threatened.The cranes breed mainly during the monsoons in India (from July to October although there may be a second brood),and there are records of breeding in all the months.They build large nests, platforms made of reeds and vegetation in wet marshes or paddy fields. The nest is constructed within shallow water by piling up rushes, straw, grasses with their roots and mud so that the platform rises above the level of the water to form a little island. The nest is unconcealed and conspicuous, being visible from afar