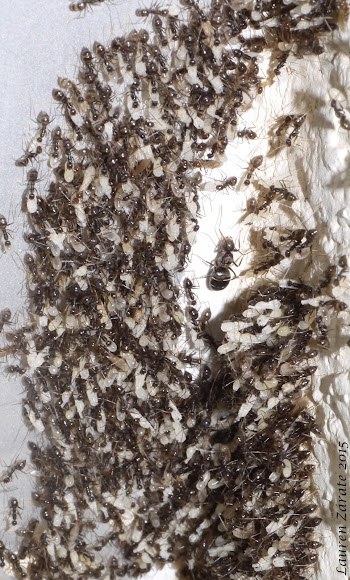 This small colony of ants (each about 3 mm long) were huddled in their entirety in a corner of a wall about 30 cm above the ground. The much larger queen was in the center in a cleared area (first and last pictures). Her immediate attendants were close by. All the other ants were carrying either an egg or pupae which had been removed from their cells. There were several aletes (males?) around the edges of the group. It had rained hard in the afternoon and they must have had their nest flooded and were waiting out the night and the rain on the wall. It was amazing to see the ants protecting their young and pupae and how they left a large cleared oval around their queen. The last picture shows more or less the entire colony. Maybe these were all that had survived.

Gas station on the outskirts of Arriaga, Chiapas.