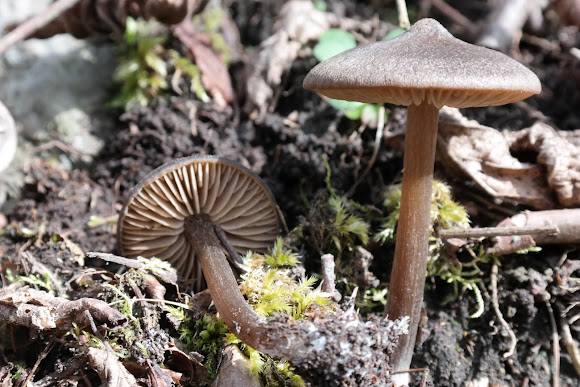 Saprobic; growing scattered to gregariously under red pine and other conifers; spring; North American distribution uncertain (described collection was made in northern Michigan).

A lot of pointy, brown entolomatoid mushrooms appear in springtime woods on our continent, and they are often encountered by morel hunters and others who are eager to spend time in the woods after a long winter. Although these mushrooms can be labeled "Entoloma vernum" in a field-guide-ish sense, many of North America's springtime Entoloma species are probably unnamed--and even those that meet a stricter definition of the European species Entoloma vernum, like the mushrooms from northern Michigan described and illustrated here, might not survive the application of this species name in a contemporary, DNA-based setting. The European Entoloma vernum is defined primarily on the basis of microscopic characters, including a lack of cheilocystidia, the presence of encrusting pigment in the pileipellis and clamp connections in the hymenium, and heterodiametric spores averaging over 10 µ long. Macroscopic features include the dark stem with pale hairs at the apex, and the occurrence in conifer forests in spring.