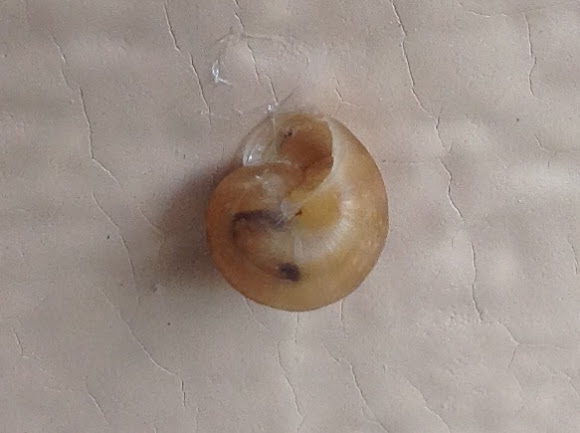 Snail: I found this snail, resting on the garage door, at 8:30 p.m. at night. This snail, was about three fourths of an inch wide. This snail, was brown in color, plus some yellow and purple. Kingdom: Animalia Phylum: Mollusca Class: Gastropoda Snail, is a common name, that is applied most often to land snails, terrestrial pulmonate gastropod Mollusca. Land snails that have only a very small shell ( that they cannot retract into ), are called semi - slugs. The snail, is a small to medium sized Mollusca, that is generally split into three groups, which are: land snails, sea snails, and freshwater snails. Snails, are generally herbivorous, primarily eating vegetation, such as: leaves, stems, flowers, soft bark, fruit, vegetables, fungi, and algae. The Gastropoda or Gastropods, more commonly known as snails and slugs, are a large taxonomic class within the phylum Mollusca. The class Gastropoda, includes snails and slugs of all kinds and all sizes, from microscopic to large. This snail was alive, and able to move.

The snail, is found on every continent on Earth, with the possible exception of Antartica. Although snails are found across a wide variety of habitats, they are most commonly spotted in areas, when there is plenty of vegetation. Snails live in such places as: marshes, woodlands, pond margins, and backyard wildlife habitats. Look for them in flower and vegetable gardens, under leaves, mulch, rocks, logs, in cracks and crevices, and under flower pots and other fixtures.