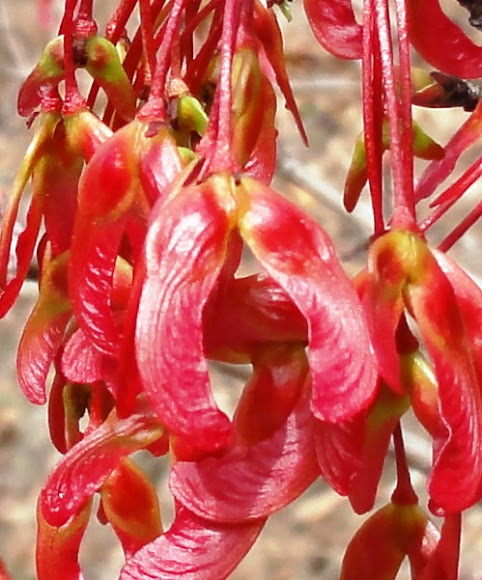 A. rubrum is one of the most abundant and widespread trees in eastern North America. The fruit is a 15 to 25 millimeter (.5 to .75 inch) long double samara with somewhat divergent wings at an angle of 50 to 60 degrees. They are borne on long slender stems and are variable in color from light brown to reddish.[5] They ripen from April through early June, before even the leaf development is altogether complete. After they reach maturity, the seeds are dispersed for a 1 to 2 week period from April through July.[4]

The species is native to all regions of the United States east of the 95th meridian west, with only three exceptions, namely the Prairie Peninsula of the Midwest, the coastal prairie in southern Louisiana and southeastern Texas and the swamp prairie of the Florida Everglades.[

Growing on a wooded drive near an old church and cemetery This specimen had particularly red and glossy samaras! I thought they were beautiful!