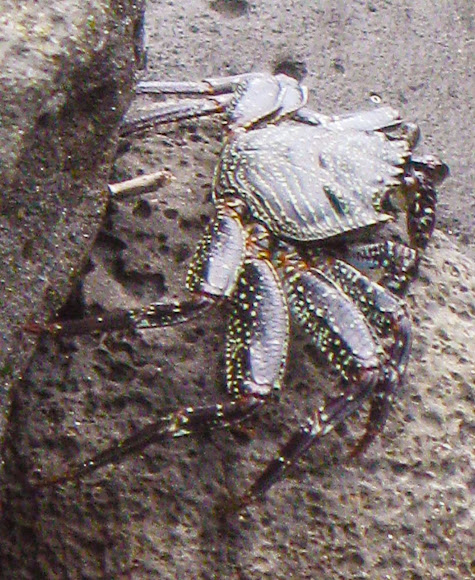 When living, the Thin Shelled Rock Crab is a deep purple, almost black, with delicate lacy white markings all over its carapace and legs. When it dies or sheds its shell to grow larger, the unoccupied shell turns bright red on exposure to the sun. Either way, it's a distinctive crab about which there is almost NOTHING on the web. A'ama is the Hawaiian name for this crab.

This crab is a denizen of rock jumbles at the edge of the surf. It scrambles around seeking food and hiding in crevices at the approach of danger. You can hear them clicking and creaking as they jam themselves into hiding places. On Kauai they were the most common crab, both on the rocks and as cast-off crab shells along the beach.

I combined three spottings in the photos above to include a pair of live crabs, a washed up newly dead one, and a sun-reddened cast-off shell.

oops! I know better than that! Thanks, Scott.

Moved to the arthropods category :-)