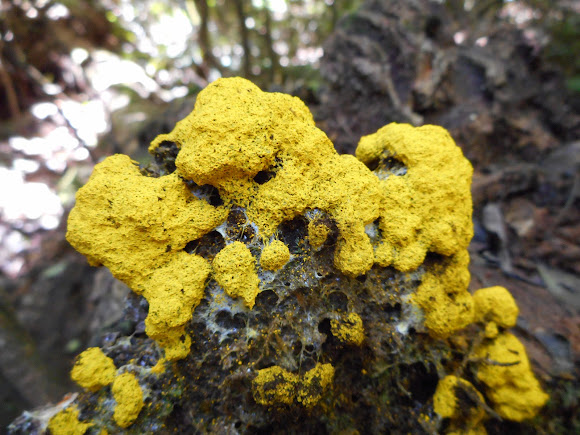 This is a slime mould species. Commonly known as Dog Vomit fungus, and also Scrambled Egg Slime, because of its peculiar yellowish, bile-colored appearance. As it ages, the mass changes colour to white and eventually becomes a brown-black dusty mass. This species is known to cause asthma and allergenic rhinitis in susceptible people. Not a fungus?

Subtropical rainforest section of the Bare Rock Track, near Mt. Cordeaux in Main Range National Park. Very cool, damp, and well-shaded area on top of the escarpment. Often misty and drizzling rain. Usually found on moist leaf litter or garden mulch, but this spotting was found on a rotting log. Only one specimen found in this area.

This national park is World Heritage listed, and forms part of the Gondwana Rainforests of Australia. http://www.environment.gov.au/heritage/p...