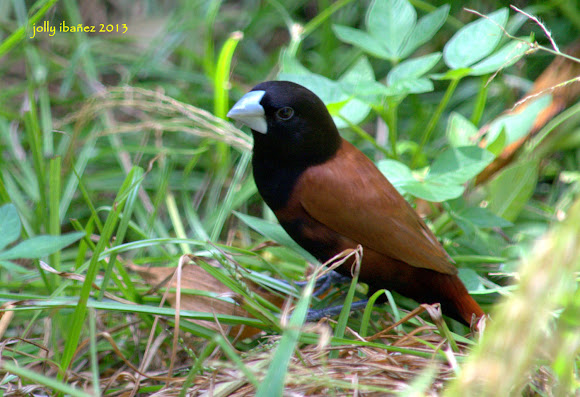 The Chestnut Munia, (Lonchura atricapilla) (formerly considered as a subspecies of the Tricoloured Munia Lonchura malacca atricapilla) also known as Black-headed Munia, is a small passerine bird. This estrildid finch is a resident breeding bird in Bangladesh, Brunei, Cambodia, China, India, Indonesia, Laos, Malaysia, Burma, Nepal, Philippines, Singapore, Taiwan, Thailand, Vietnam and Hawaii. Known as mayang pula ("red maya", to distinguish it from the predominantly brownish Tree Sparrow which is also called maya) in the Philippines, perhaps because of its brick red patch on the lower back that shows only when it flies. The Black-headed Munia is the former national bird of the Philippines (the Philippine national bird is now the Philippine eagle).[2]

The Chestnut Munia is a small gregarious bird which feeds mainly on grain and other seeds. It frequents open grassland and cultivation. The nest is a large domed grass structure in a bush or tall grass into which 4-7 white eggs are laid. The Chestnut Munia is 11–12 cm in length. The adult has a stubby pale grey-blue bill, black head, and brown body, with a brick red patch on the lower back, visible only when it flies. Some races also have a black belly. The sexes are similar, but immature birds have uniform pale brown upperparts, lack the dark head and have white to pale buff underparts.