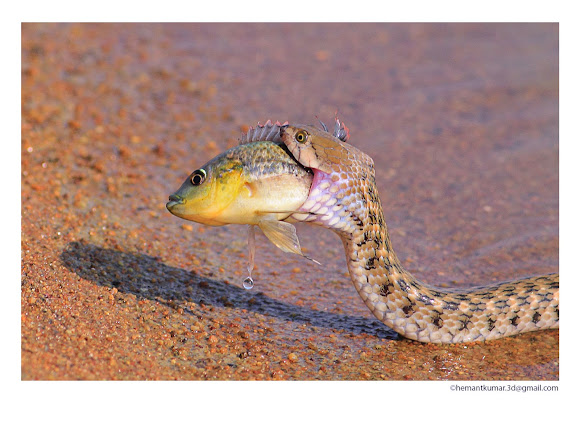 This snake's eyes are rather small, and shorter than its distance from the nostril in the adult. Its rostral scale is visible from above. The internasal scales are much narrowed anteriorly and subtriangular, with the anterior angle truncated and as long as the prefrontal scales. The frontal scale is longer than its distance from the end of the snout, and as long as the parietals or a little shorter. The loreal is nearly as long as it is deep. There is one preocular and three (rarely four) post-oculars. Its temporals are 2+2 or 2+3. There are normally nine upper labials, with the fourth and fifth entering the eye and five lower labials in contact with the anterior chin-shields, which are shorter than the posterior. Scales are arranged in 19 rows, strongly keeled, with outer rows smooth. Ventrals are at 125–158, anal divided, with subcaudals at 64–90. Coloration is very variable, consisting of dark spots arranged quincuncially and often separated by a whitish network, or of black longitudinal bands on a pale ground, or of dark cross bands, with or without whitish spots. Two oblique black streaks, one below and the other behind the eye, are nearly constant, lower parts white, with or without black margins to the shields.(wiki)

This snake is found in or near freshwater lakes or rivers. It feeds mainly on small fish and water frogs.

check for the full full sequence in Gif
http://360pixual.blogspot.in/p/gif.html

wow thats is an amazing shoot

oh, my! this snake was so busy it didn't mind you taking picture whilst feasting :) Cool!

Wow, I've never seen a snake eating a fish. A frog, yes, but not a fish. Very cool series! And Congrats on your SOTD!

Congrats on your wonderful Spotting of the Day Hemant!

Amazing capture Hemant,congrats on another SOTD and thanks for sharing such a beautiful spotting page

Amazing spots. Congratulations for your another spotting of the day!

and 92 other people favorited this spotting