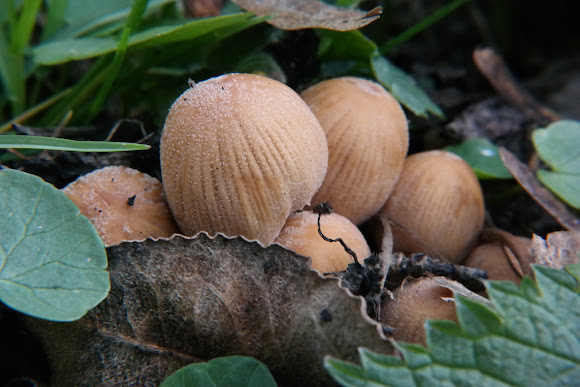 The cap is initially 1–2.5 cm (0.4–1.0 in) in diameter, oval to cylindrical, but expands to become campanulate (bell-shaped), sometimes with an umbo (a central nipple-like protrusion); finally it flattens somewhat, becoming convex. When expanded, the cap diameter reaches 0.8–3.0 cm (0.3–1.2 in) with the margin torn into rays and turned upwards slightly. The color is yellow-brown or tan often with a darker center, then pale yellow or buff from the margin inwards. The cap margin is prominently grooved almost all the way to the center; the grooves mark the positions of the longer gills on the underside of the cap. When young, the cap surface is covered with white or whitish shiny particles, remnants of the universal veil that covers immature specimens.The particles are loosely attached and easily washed away, so that older specimens are often smooth.Coprinellus micaceus is hygrophanous, meaning it assumes different colors depending on its state of hydration. The gills are crowded together closely, and have an adnexed (narrow) attachment to the stem.Initially white, they change color to dark brown then eventually black as the spores mature. Expansion of the cap causes the gills to split open down their median planes, tearing the cap margin into rays. The process of spore discharge and autodigestion begin at the bottom of the gills before the upper parts of the gills have become completely blackened. The brittle stem is hollow, and measures 4–10 cm (1.6–3.9 in) long by 0.2–0.5 cm (0.1–0.2 in) thick and is roughly the same diameter throughout the length of the stem. It is generally white, but may discolor to pale dirty cream from the base up. The stem surface is at first velvety with a very fine whitish powder, but this eventually wears off, leaving it more or less smooth. Stems may have a rudimentary ring at the base, another universal veil remnant.The spore print is dark brown or black. The flesh is thin, fragile, white in the stem, and brownish in the cap. Its odor and taste are not distinctive.Individual fruit bodies take an average of five to seven days to fully mature.

Coprinellus micaceus is a saprotrophic species, deriving nutrients from dead and decomposing organic matter, and grows in and around stumps or logs of broad-leaved trees or attached to buried wood. It prefers feeding on bark, particularly the secondary phloem, rather than the wood.In the scheme of the succession of fungal species involved in the decomposition of wood, C. micaceus is a late stage colonizer, and prefers to feed on wood that has already decomposed sufficiently to have reached "a friable softened consistency".A 2010 study suggests that the fungus can also live as an endophyte, inhabiting the woody tissue of healthy trees without causing disease symptoms.The fungus is also associated with disturbed or developed ground, such as the sides of roads and paths, gardens, building sites and the edges of parking lots;it has also been noted for growing indoors on rotting wood in humid environments. In one instance it was discovered about 120 m (400 ft) underground in an abandoned coal mine, growing on wooden gangways and props used to support the roof.